When I started this blog many years ago, I named it "Nuggets from God."  I felt like God wanted me to share with others some of the 'nuggets' the things He showed me.  It wasn't ever intended to be a daily thing because, honestly, not every nugget He gives me is for sharing.

Some years ago, I updated the name of this blog to "Treasures Found in Him."  I believe every little 'nugget' God gives me is truly a treasure.

So…what has happened?  What has kept me from sharing?  Well, these past couple of years, well maybe about 3-4 years now, my folks haven't been well.  Mom has always been somewhat fragile, but my daddy was always bigger than life.  There wasn't anything he couldn't do!  In these past 3-4 years, his health took a nosedive.  He fought bladder cancer for several years but was cured of that, praise God!  He also fought prostate cancer, but it metastasized to his ribs and was a constant issue.  He battled COPD and Congestive Heart Failure which was the ultimate culprits in his death.

Everyone and I mean everyone, expected my mom to go before Daddy because of her issues.  She has survived lung cancer  (2015-2016) after being given a 15% chance of survival…but God!  She has had a hard life – a broken back in 1969, reinjury to the back in 1972.  She has always been in constant pain due to the back issues.  We have all been pleasantly surprised, and so thankful, by her survival of the lung cancer.

It was 2017 when my daddy had a rib resection.  This is the removal of 3 ribs on one side due to a tumor caused by the metastatic prostate cancer.  This was the beginning of the end for him.  In 2018, he had open-heart surgery for a double bypass.  He was in the hospital 3 or 4 times in 2019, once to place a pacemaker/defibrillator and the COPD was getting so much worse.

In the wee hours of Christmas morning 2019, my precious daddy slipped from this life to his heavenly reward.  My world was shattered!  Due to my mom's health and her stubbornness, my world has not returned to normal.  She refuses to move or downsize…she lives on 10 acres.  My hubby is having to take care of the property sometimes spending 8 hours a week just mowing.  Mom is somewhat of a hoarder, so her house is FULL of stuff.  She will not sell the vehicles.  She wants someone to be with her all the time.  She doesn't want to be alone.  She will not move in with anyone.  So…it started out with my brother and I taking turns spending the night every night.  We have managed to wean her down to 4 nights a week but it's still a lot.  We have our own lives, spouses, kids, grandkids, etc.

My mama is selfish.  She wants things her way (don't we all!).  She also has the beginning stages of dementia or Alzheimer's which makes things so much harder.

o, now that I've bored you with my recent life…I will tell you that I haven't seen many nuggets from God lately.  Oh, I'm not saying they aren't there.  I'm sure they are.  I'm just not seeing them. I'm so focused on trying to keep up with everything in my life that I can't/haven't take the time to look for them.  Trying to be a wife, mother, Nana, lead pastor, bookkeeper for our business (auto repair), and take care of mom has me running like crazy.  Somedays, I don't know if I'm coming or going!

Somedays, I find myself completely lost.  I miss my daddy so much.  He and I got particularly close during my mom's cancer treatments.  We were always close, but that bond really strengthened in 2015-2016.  His death has been the hardest thing I've ever had to endure!  If you've lost someone close to you, I'm sure you understand.  I may be in my early 60's but I feel like a little girl…I just need my daddy!  There have been so many times in this past year when I've needed to talk to him, to ask his opinion.  Realizing I can't do that has been difficult.

Perhaps the 'nugget' in all this is that I need to rely on God more.  Perhaps it's that I truly can do all things through Christ Jesus.  All I know is that I got to this place in my life a lot sooner than I thought I would.  Funny how age sneaks up on us!

If you follow this blog, I can't promise that I'll post again in a few days, a month, or even 6 months.  I am trying to come to terms with this new phase in my life.  As I do, perhaps God will reveal some new nuggets that I can share.

I have relied on Deuteronomy 31:6 NKJV and Hebrews 13:5 NKJV during this year more than ever!

"6 Be strong and of good courage, do not fear nor be afraid of them; for the Lord your God, He is the One who goes with you.  He will not leave you nor forsake you." ~ Deuteronomy 31:6 NKJV

"5 Let your conduct be without covetousness; be content with such things as you have.  For He Himself has said, 'I will never leave you nor forsake you.'" ~ Hebrews 13:5 NKJV

{Illustrated Faith} I AM

The new Illustrated Faith kit came out this week.  There is nothing more exciting than when I see that colorful envelope package in my mail box!  I can't wait to open it!  The theme for this kit is "I AM."  The colors of the kit are gorgeous and complimentary.

In the 14-day devotional booklet, written by Melissa Garcia, you will find such topics as; fearless, free, daughter, patient, loved, strong and several others. 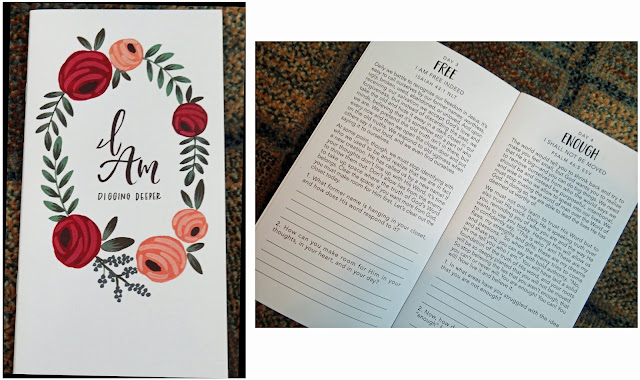 One of my favorite pieces in the Illustrated Faith kits is the clear stamp collection.  And the one with this kit is no exception.  Each piece of the stamp collection goes with the theme of the kit. 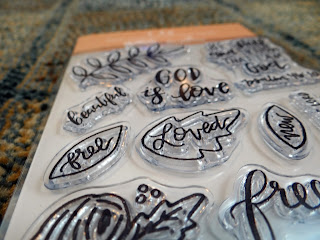 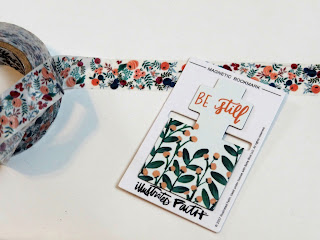 The cardstock sticker sheets are amazing.  They are colorful and sturdy.  I love the many different ways to use them. 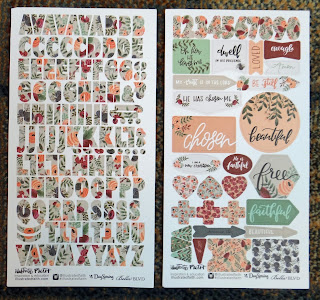 The tip-ins, or as I call them, the bookmarks, are very cute and functional.  They are full size and even have space for me to write notes on them. 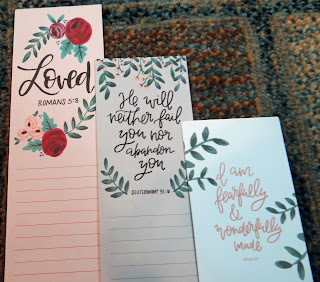 Next we have the thank you card from Shanna.  I love getting these little cards.  They always match the theme and Shanna is so encouraging! 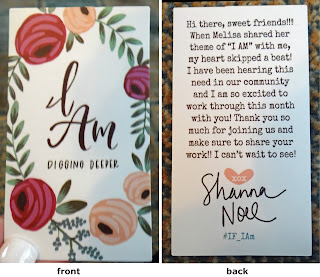 And finally, we have the clear plastic pouch where you can store every piece of the kit.  It's the perfect size to put in your purse or to keep in your Bible bag.  And it matches the theme of the entire kit. 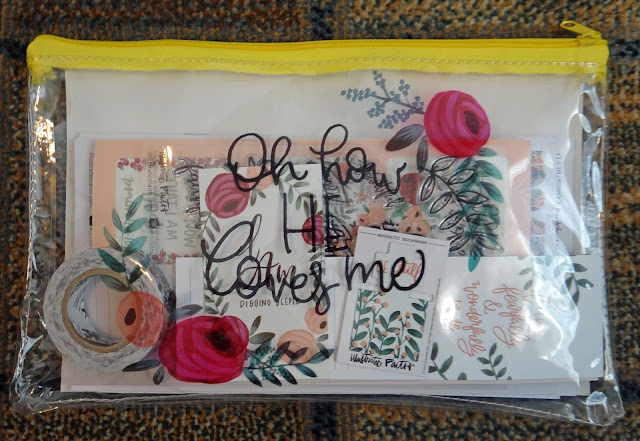 This kit, this Illustrated Faith I AM devotional kit, is exactly what I needed.  Being the lead pastor of of our church, I almost never feel like I am...enough or free or patient.  And most of all, I never feel capable to do the job.  But I know that God has called me for such a time as this.  The truth is, I am NOT enough.  I am NOT free.  I am NOT patient.  And I most certainly am NOT capable of doing this job...on my own.  But with God, I can do all things!

I know this amazing kit will bless you.  To check it out, along with so many other things Dayspring has to offer, just click the banner below!

The creator of Illustrated Faith, Shanna Noel, has a new line of Dayspring Cards!  They are just adorable.  They are perfect for sending a quick note to a friend or loved one.  They are $2.99 each or you can purchase a set of 10 cards with a clear zippered pouch for $20!!  Boy, that's a great deal...a savings of $.99 per card!!  Just look at these cuties... 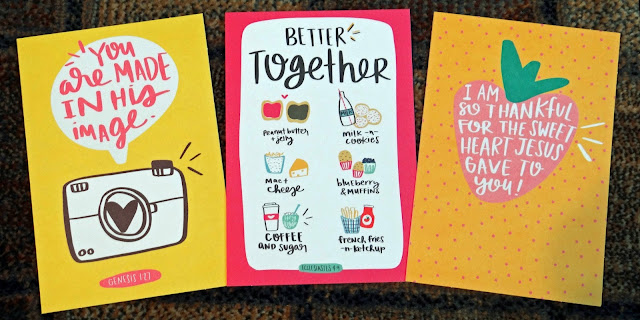 To look at the other styles available and to order just click here!!

*Disclosure: I received this product for free in exchange for my honest opinion. All opinions are my own. Links on this page may be affiliate links. Thank you for supporting this ministry by using the affiliate links.
Posted by Debi at 3:10 PM 1 comments